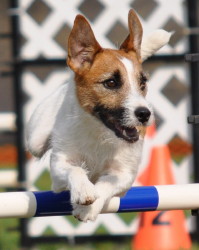 We had been looking for a Parson Russell for about 2 years when we came across Beckham as a young pup, and knew right away that he was too good to pass up.

He has been Kirstin's dog from the start and they are inseparable. Beckham has a great Terrier temperament. He loves everyone, gets into everything, and never backs down from anything.

In 2010 he unfortunately had been to attacked by a dog during a superdog show, and was injured for that years regional championships. But 2011 we hope to bring some tough competition to the other 16" regulars competing 🙂

He has ups and downs with his agility training. But at 4 years old has settled into an amazing agility dog. He is consistently running over 5 yps in standard and over 5.8 in jumpers and steeplechase. Beckham is VERY fun to run and is always pushing me to go faster.

Beckham is now retired to vets but in  his career attended several World championships including FCI, IFCS, and the European Open. He also won 2 silver medals as well as a bronze and won the 2016 Canadian National Agility championships.

Beckham will play flyball, but he still has yet to figure out the competitive side of the game. Once he has the ball, the game seems to end. But I have searched high and low and have found 2 toys he like MORE than a ball! Now just to get him to bring the ball back while I have one of those toys....catch 22

Beckham is just starting to really come together with disc. He loves catching the long throws and has won every competition he has entered. With winning catches of 90, 110, and 120 feet. He will catch as far as I throw, and I can not wait to take him to the skyhoundz qualifier in August. Next to work on freestyle.