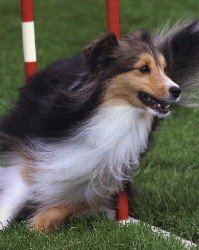 Dart has never let her small stature (13 inches) stop her from being one of the fastest height dogs in Flyball in Western Canada, averaging 4.8 seconds in flyball. She is SUPER competitive and is ALWAYS ready to take on those bigger dogs. The faster they are, the more she determined she is to try to beat them.

In agility, Dart is a little spitfire on course, still trying to outrun the Border Collies. It took a couple of years to be able to handle her speed, split second decision making, and confidence in her own ability to figure out the course, but as she matured consistancy began to come with the speed.

Dart had the honour of being chosen as one of the 8 dogs on Canada’s first International Agility Team, invited to compete in France at the FCI World Agility Championships in 2003. She has also competed with two different handlers at the NADAC North American Dog Agilty Championships, where she earned a number of firsts in very competitive rounds. Dart has also consistently placed in the AAC Regionals, and loves to play at the Nationals each year.

Dart had a great time working as one of the main character dogs in the movie “Daniel and the Superdogs” a feature film shot in Montreal, and released in 2004. Here are some still pictures:

Dart was again chosen to the World Agility team in 2005, this time competing in Spain. Although an off course in the jumpers round eliminated her chances for a placement in individual competition, in her individual agility round she placed 4th. In her team runs she pulled out a 6th in Jumpers, and a 3rd place in Agility, helping the Canadian small dog team to a 6th place finish in the World Championship. Her showing made her the number one small team dog in the World!