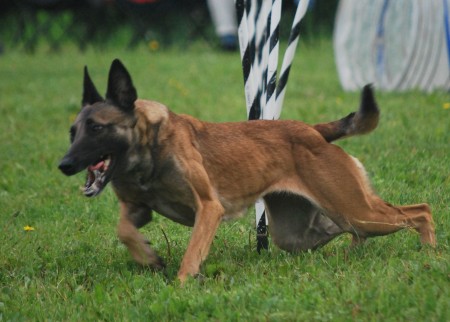 Havoc comes very strong Schutzund and Ring Sport lines, but even though she still has incredible drive, she has matured into a very good natured Malinois. She gets along well with other dogs, and loves showing off in front of the crowds in Superdog shows.

In 2007, At 2 1/2 Havoc qualified for her first AAC National Dog Agility Championships. In her Jumpers round at Regionals she even went clean to a first place finish in the 26" category.

At the 2008 AAC National Dog Agility Championships, Havoc had some great moments in 26" Regular, but couldn't put it all together. But she did have the fastest time in both the 1st and 2nd Steeplechase rounds of ALL of the 26" Steeplechase dogs. Unfortunately she pulled a couple of bars in the second round to put her out of contention.

In Flyball in October of 2008, though Havoc spends VERY little time in flyball training, Havoc managed to pull out some sub 3.9 times to make her the FASTEST flyball dog in Alberta!

Havoc has done a little schutzhund bite work with Micheal Ellis. She LOVES the sleeve, and although she does need to work a bit on her OUT, Micheal said that she showed lots of promise, and was a natural talent.

She finished her Conformation Championship in style at the NACA Shows and Trials in 2009, going Winners Bitch and best of Winners on two days for a total of 6 points (there was a Belgian Booster) AND winning BOTH High Belgian in Rally with a perfect 100 score and High Belgian in Agility with 4/6 qualifyers in Excellent.

2010 Puppies! Havoc was bred to an awesome male Malinois named Gryff. Gryff is a young boy, but he has the drive, the personality, the build, and the looks to complement Havoc in every way. At 2 Gryff won the Canadian National Ringsport 2 National Championship, and at 3 he was well on his way to his Ringsport 3 title. Pics of Gyrff Gryff's father is the legendary Rodin. Here are some video's of Rodin who is the pups grandfather... 1) Escort 2) Guard of Object