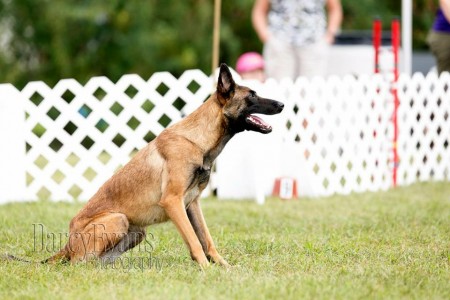 Radical Rabbit is a 5 year old malinois, She is a one in a million dog! Being one of the fastest malinois out there, and has shown to be a superstar at anything she is asked to do.

Radical is an AMAZING high jumper, with a PB of over 62", we hope to one day break the world record officially. She loves disc, and wow the crowds with her big air and unique tricks. I do not compete often in disc but when I had, rabbit qualified for worlds at a year old. Dock Diving is another of rabbits favorites, we practice often in the summers, but have only jumped in competition once, jumping just under 20 feet with ease again at around a year old. In flyball radical is a power house, she can go all day in any position. posting  consistent 3.7-3.8 with a PB or 3.62. Agility is radicals prime area of expertise, she has already been a member of 3 world teams ( FCI,EO,IFCS) We hope to see some great results from her this coming year at the world championships. She also placed 3rd at the 2015 AAC national championships and 2nd in the 2015 alberta regionals, both with an injured handler hobbling around the course.

Radical Rabbit has plans to have a litter of puppies late 2016. contact o_neill17@hotmail.com for more info.