Well, one thing about having two puppies. It is easy to tell them apart. Especially when there is such a big size difference.

At this point they are not doing much except eating and sleeping. For the first three days they lost weight, but on day four the girl held fast, and the boy gained a little. Since then, they have both been gaining in leaps and bounds.

Even when they were losing weight I wasn't very concerned, because from the moment they were introduced to mom both of them grabbed hold and started eating, and have been consistently voracious ever since.

The boy has been much bigger from the start, both in terms of bone and sheer weight. At this point he doesn't look like he has longer leg, just bulk. Girl is a lot smaller, but she is still very tough. 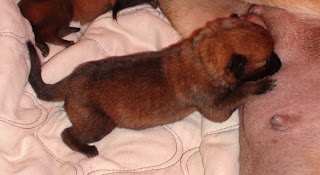 It is fascinating to watch the two of them fight for food spots, even though there are only two of them. If he gets there first she just pushes around to look for another teat. But eventually, or if she gets there first, he tries to push through her at some point to get to a better spot. Just puts his head down and pushes like a bull. She doesn't give an inch though, and simply hangs on and pushes back, and eventually he goes over or under her to get to another spot.

Doing ENS every day. They object most to the que-tip in the toes (doing a different foot each week). They squeal at the beginning, but when they start feeling it between the toes they stop and seem to try to figure out what they are feeling. During the other exercises they don't do much, but wiggle a bit and then settle.

Havoc is doing well. She is now mostly out of the whelping box, and now even wants to come every time I put my shoes on to go outside. I am waiting just a couple more days to start getting her back into shape. 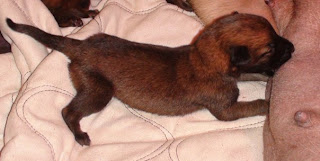 The pups spend very little time together. My vision of pups is of a heap of puppies all piled up together. But these two are generally found at opposite ends of the whelping box, snuggled under a bit of blanket. The only difficulty is making sure they don't get stepped on, as it is often difficult to tell which bit of blanket they are under!