My name is Kirstin O’Neill, I am a dog trainer and coach from Edmonton, Alberta, Canada.

I enjoy problem solving issues, and finding ways to better the performance of not only the dog but the handler. After a knee injury that affected me for several years, I went from being a very fast handler who could “just get there”, to one who could not rotate, or run. During my injury I had to relearn and reteach my dogs and myself how to be independent and efficient in our lines.  In the end I am grateful for my  injury as it made me a better handler and trainer, and forced me to teach and proof skills I did not “need” before but have made my dogs even more competitive. It also gave me a new appreciation for handlers who are not able to “just get there”,  a big part of my handling style is finding ways to stay ahead of your dog without out running them.  My knee was finally repaired Nov 2017 after almost 5 years. 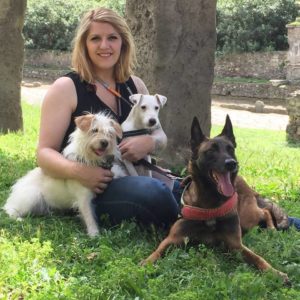 I was raised on dogsports, and for more than 24 years have been involved in many aspects of dog training and competeing.

Starting at a very young age I could be found out training, and when my family opened one of the very first dog daycares and dogsport training facilities in Canada, I would spend every spare moment after and before school training day care dogs. ​

​When it comes to training, I am a firm believer in using aspects of different sports to help better performances in ALL venues. I have trained dogs in many dogsports including Agility,  Flyball, Obedience, Trick Training, Disc, Dock Diving, Freestyle, Barn Hunt, Terrier Trials, Whippet Racing (Straight/Oval/Coursing), IPO, French Ringsport, Tracking, Rally, Scent Hurdling, and Conformation., and all are interconnected. Tools from one sport used to benefit or motivate a dog to perform better in another.

My work with dogs has also expanded to including live stage acting including professional productions off Annie, The Wizard of oz and a 4 week long production of “Shakespeare in love” which was staged in two major cities. I was also a long time member of the performing show “Superdogs”, prior to forming our own amazing performing troop “Dynamo dogs”.

Although all my dogs are trained in many venues, agility is our biggest passion.

Luna was the first dog I even competed with, she was a borzoi. I was younger than 10 when she was given to me to run, although she was fully trained in agility I took it upon myself to try and teach her new behaviours and tricks, as well as improve her already trained behaviors. Although she was already over 7 when we joined forces she learned to enjoy her work and even how to single step the weaves and catch a disc.

Euro, a Berger Picard, was my first dog and he had several top 5 placements at the national level. He is still the fastest BP to play flyball, or qualify for a disc dog world championship. Though he has passed on many years ago, he is still  the most accomplished/titled dog of his breed.

Beckham (PRT)(RIP) and Radical Rabbit (Malinois) are both Regional and National Champions; both have earned spots on world teams competing at IFCS, FCI, and EO, and both have brought home GOLD for Canada from the World Agility Championships! Beckham won his last international medal at 11 years old earning a silver. He went on competing during his retirement at local trials until his death in 2020. Radical Also managed to win the AWC/EO tryouts in 2019 as a 9 year old, winning 2 of the 5 rounds and placing 2nd and 4th in another two. She went on to compete at AWC later that year at 9.5 and managed a 14th.

Tenacious Turtle, my Whippet, is also well known for giving the border collies a run for their money, and he has several placements at the Regional and National level, as well as top 5 placements at the only AWC/EO tryouts he attended, he also won Top Dog at a UKI cup in 2017 against many world team dogs. He also competed with team Australia in 2017 at the World Agility Championships, when I loaned him out to that team.

Posh Piranha came to me as an adult, but since then we have had many Regional and National wins as well as earning a spot as alternate on the 2017 IFCS team ( a year after we started together) and a full spots on the 2018, 2019 and 2020 teams as well as the 2019 WAO team where she also managed to earn a 2nd place. She also earned a spot on the 2019 AWC team by winning a round and placing in the top of several others at the tryouts.

Crocodile Crunch was a foster fail.  Although she has some issues both behaviorally and structurally, Crunch is proving to be a spectacular agility dog and made the 2019 WAC team and the 2019 WAO team in her second year of competition, bringing home medals and top placements for Team Canada in both, she has placed at the top of many national  events, and earned a spot on the 2020 IFCS team.

Pinnacle Penguin is fr0m a long waited combination of Radical Rabbit and Havocs son Pryme. She is just over 2 years old but has already competed at FMBB ( Belgian shepherd World championship held in Czech 2019) AND qualified for the Canadian nationals where she managed to place 1st TWICE above many world team members and some of the best dogs in the country. She is really quite incredible and I have been hopes for her on the international stage.

I also have been training and hope to compete soon with one of khirugais breeding hopefuls Bustle Bug. She was acquired as a young adult as a potential partner for our stud excel. Having been raised in a breeding kennel environment she did not have the best start for performance. But she has great food drive, no environmental issues and is very bold. Although I have had to work through her distrust of people touching her, she has improved leaps and bounds from when she first came to us and I am looking forward to debuting her.

Before my knee injury

After my knee was fixed